How to Safely Feed Square Silage Bales to Cattle

Established in 1876, and working 86,000 acres, Mulvey Gulch Ranch in Bolder, Montana were looking for a safer system for feeding square bales without processing the hay too much. Find out what they discovered...

Managed by Bev and Randy Kirk, Mulvey Gulch Ranch is a versatile operation, in a beautiful location surrounded by the Elkhorn mountain and Bull mountains with the ranch stretching 30 miles to the edge of both mountain ranges. The primary business is a working ranch, operating on a year-round basis raising black angus cattle, calves, and registered breeding bulls with sought after genetics.

The ranch is home to herds of elk, whitetail and mule deer, moose, antelope, black bear, mountain lions and an endless variety of birds including bald eagles and golden eagles. The vast majority of the ranch can be traversed only by foot or horseback.

They had been feeding their square bales, biscuit-by-biscuit off the back of a wagon, to try and preserve the quality of the alfalfa leaves, but needed a more efficient and a safer way to get the job done at the scale of their operation. This method was very labour intensive, and dangerous in the winter conditions, they were still resulting in a lot of waste from cattle grouping around clumps of hay biscuits.

They also needed a way to feed their square silage bales, as this was virtually impossible to do by hand and would leave very large clumps to be wasted 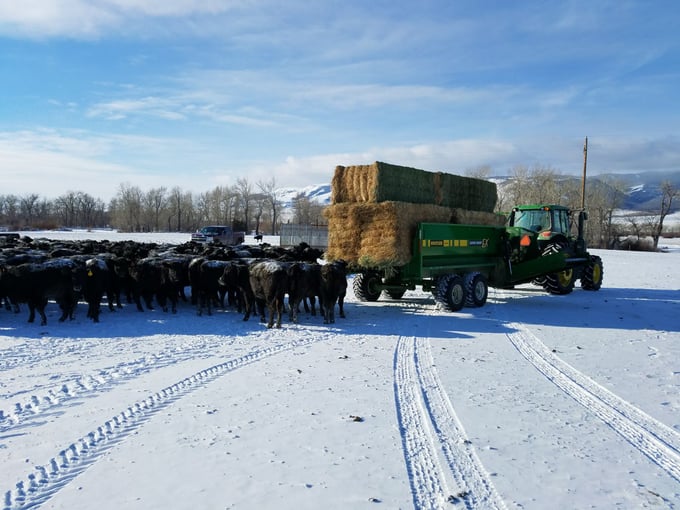 Having discovered the benefits and the capability of Hustler's feedout wagons, Randy and his team got in touch with the team at Hustler Equipment USA to snatch up the first of the new 2018 Super Comby EX to land in the market thanks to Hustler's no hassle 30-day satisfaction guarantee.

"The machine is not like a processor where you're losing

and the cattle don't have to lick them off the ground"

Their new Super Comby EX can take up to 6 of their large square alfalfa bales, reducing the trips and enabling them to feed out into a long, consistent, narrow (or thick) windrow so all the cattle can get in on it. Because they've now got a narrow windrow, there's not the trampling issue they'd previously had.

See what opertor Paul has to say about the Super Comby EX: