Having discovered a trend of farmers all over the globe switching from TMR Mixer Wagons to Comby feeders, we decided to visit a large-scale dairy farm in the Taranaki region to hone in on why they choose the largest Mega Comby XL...

Whilst TMR mixing wagons have their place in high production feedlots, where the cattle spend their entire life feeding on a ration and the mix is dialed up to the limits. However, for a lot farms around the world, they pose a safety risk and consume too much labour and fuel. Often their operational costs far outweigh the benefits that are being utilised. 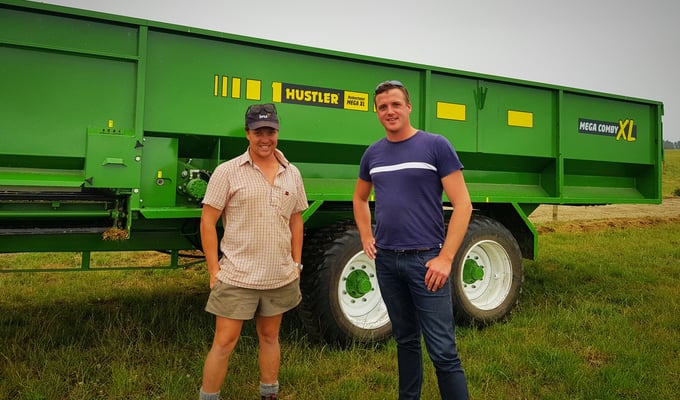 Fraser Middleton, runs 2 dairy farms in the dairy-intensive region and feeds his herd a mix of Maize and Grass silage, and on some properties bales, along with other supplementary feeds as to when and what the nutritional needs are of his herds. Rotationally grazing his pastures and supplementing them with a mix, requires a machine that is stable and has enough floatation to the feed out rain-hail-n-shine (as in their current dry conditions). When the time came to replace his silage wagon, having weighed up the pros and cons of mixer wagons vs the Comby feeder, he chose to run with the Mega Comby XL

Unique to Hustler's Comby Feeders, is the load dividing system whereby slow moving, hydraulically powered floors move on demand. This gives Fraser the ability to mix his feeds, by first layering grass silage, then the Maize silage in the next layer and then other products on top of that. So when each floor has activated a portion of each layer (depending on the thickness) is mixed and fed by the side delivery elevator.

Fraser found the Comby could mix the ration more than adequately for the nutritional requirements of his herd. To compare the time it takes for a TMR to get the mix good enough, there are some good savings to be achieved.

The layering method is nothing new. From previous experience, they'd tried to utilise the layering method with a conventional silage wagon but it wasn't much of a success. Because the floors were continuously working, the bottom layer would get stripped out of the load and the mix would start highly concentrated, and end highly diluted. With the Comby, thanks to each floor being operated on demand. The mix delivered in the windrow resulted in a marked improvement in feed consistency throughout the entire load. And by using a bar/chain elevator on the Comby Feeders, the different feeds are blended together.

Watch the Mega Comby in action

To experience the load dividing advantage for yourself

book a demonstration on your farm